It is worth noting that the term "Deitscherei" now exists as a playable nation in the video game Europa Universalis IV. This makes me smile!

I first coined the term "Deitscherei" in 1988 in order to refer to the non-contiguous areas that were settled heavily by the people who came to be known as the Deitsch. The first Deitscherei website went up in 1996, and, since then, the term has become used more widely.

As I linked to their page, I hope they will not mind if I share a screenshot of the Deitscherei nation in their game. 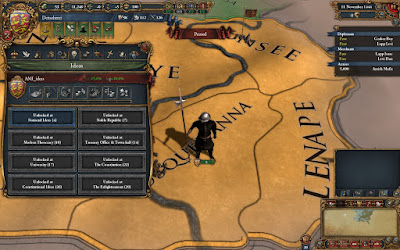 We've made it to video games!
Gschpellt vun: Deitscherei um 21:40 No comments:

Good Article about the Colonial Deitsch

Here is a good article describing the Colonial Deitsch... and it also reflects why Benjamin Rush has long been seen as a friend of the Deitsch people: The Life of the German Settlers in Colonial Times.

For those who have never read Dr. Rush's 1789 publication, An Account of the Manners of the German Inhabitants of Pennsylvania, it is a worthy read.
Gschpellt vun: Deitscherei um 17:20 No comments:

The list of words missing from the Deitsch dictionaries is increasing!