Tonight is what we Urglaawer call “es Lichtfescht” or, more correctly in Deitsch, es Lichderfescht, which is our festival of lights. On Night 3, we discussed the cleaning of the hearth and of other fire-bearing vessels, including candleholders. This echoes pre-Christian customs that ended up featured as part of Christian Candlemas practice (Yoder 49-50). 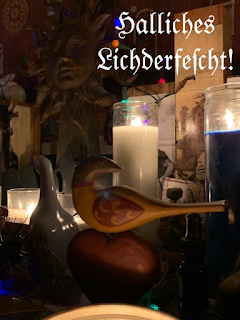 As the interviews and collecting of stories from across the Deitscherei progressed, some interesting interpretations of the use of light during this time emerged. Some of these were “superstitions” and involved sympathetic magic; others were more philosophical.

The superstition that turned up most frequently was an idea that we sometimes hear of at Yule: adding light to the night will help to strengthen the Sun. One elderly man likened the ritual practice of lighting candles from Groundhog Day onward to a parent pushing and guiding a learning child’s bike and then releasing hold when the child had acquired ample balance to move alone.

The philosophical interpretations are more far-reaching. The whole of this observance is about enlightenment, conscious and conscientious living. At this time, we strive to finish the preparations for the ideas that we developed for the New Year at Yule. We are to be ready to put those ideas into effect by Oschdre in March.

This brings us to the mind shift (Umdenk) that we often speak about when one converts from monotheism (particularly Christianity) to Heathenry. Within the Urglaawe community, this shift was first expressed by my kinsman, Daniel Riegel, prior to his passing in 2011. He described the mind shift in the context of embracing the dark half of the year, which was consistent with many others’ experiences of recognizing the totality of the self, shadow and all. This recognition of our whole being is not the same as accepting ourselves “as is” and not striving to be better. Instead, it is using the totality of ourselves in order to become the best we can be.

There is a tendency in our society to pretend the shadowy sides of ourselves do not exist. We bury them deeply, and we are ashamed of them. This attitude is pervasive in some Plain sectarian communities, and it is rooted in Christian orthodoxy. Shadow sides are generally viewed as being “evil” or profane. Orthodoxy, meaning that one is required to believe a certain way, trumps orthopraxy, meaning that one is required only to practice the same way within a group. Orthodoxy leads to dogma, and dogma leads to suppression of variant ideas.

One of the more common beliefs within Urglaawe is that the deities want for us to be at the end of this cosmic cycle where they were at the beginning of it. To achieve this, we have to grow as a race of beings. Such growth, particularly an evolution of consciousness, is very difficult when the largest religions in the world actively attempt to limit questioning and independent thought.

Maintaining perspectives from Christianity while practicing Heathenry can result in confusion. Our relationships to the deities and to our ancestors differ from that of the Christian understanding. Our relationship to the world around us differs (see Night 6). It is difficult to wrap one’s head around the idea that there may be multiple “truths” or that our deities have individual personalities that may lead them even into conflict with each other.

And, at the risk of offending some readers of this post, the “lore” is not Gospel, and to treat the myths as such can lead one to become, for want of a better phrase, a “Christian dry drunk.” The baggage of orthodoxy remains even though the trappings of the religion have changed. Germanic Heathenry has never (at least within the period in which history has been written down) been monolithic. Different tribes knew different deities in different ways… and that is wonderful!

Ditching the mindset of Christianity is critical. We are not “fallen.” We do not need an intercessor to remove the stain of sin. We have the ability and responsibility to improve ourselves, yes, but we do so to create a better future for ourselves and for our descendants, not because we have a bill to pay from the past.

During Lichderfescht, we embrace this ability and this duty to bring enlightenment into ourselves, our communities, and our world.

This ends the musings of the Entschtanning season. The next Urglaawe observance is Grumbieredaag (“Potato Day”) on March 17, which is the first planting of the season.

Hail to those who have gone before and the wisdom they left us!

Hail to those yet to come. May we be worthy of their honor!